Search within this site. 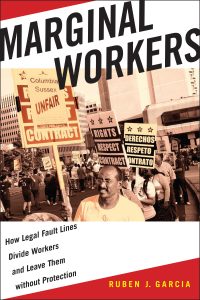 In this book, I argue that workers fall through the margins of legal protections, and because of their diffuse political power they are unable to fill the gaps in protective legislation. Available from New York University Press: https://nyupress.org/9781479823581/marginal-workers/

Undocumented and authorized immigrant laborers, female workers, workers of color, guest workers, and unionized workers together compose an enormous and diverse part of the labor force in America. Labor and employment laws are supposed to protect employees from various workplace threats, such as poor wages, bad working conditions, and unfair dismissal. Yet as members of individual groups with minority status, the rights of many of these individuals are often dictated by other types of law, such as constitutional and immigration laws. Worse still, the groups who fall into these cracks in the legal system often do not have the political power necessary to change the laws for better protection.

In Marginal Workers, Ruben J. Garcia demonstrates that when it comes to these marginal workers, the sum of the law is less than its parts, and, despite what appears to be a plethora of applicable statutes, marginal workers are frequently lacking in protection. To ameliorate the status of marginal workers, he argues for a new paradigm in worker protection, one based on human freedom and rights.